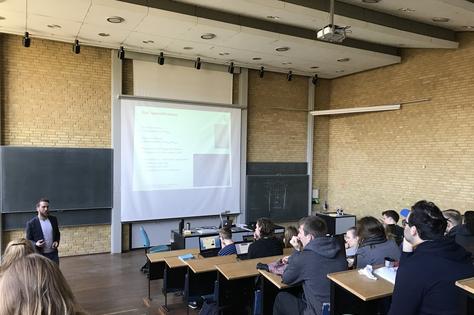 
After a little Danish Easter vacation I had the second year in a row the possibility to give the lecture “Mammalian Cell Factories” to around 60 Biotechnology Bachelor students at DTU. The half-day lecture summed up many topics about mammalian cells and how these factories differ from bacterial cell factories with all their advantages and disadvantages.
Besides that, the main learning objectives were the understanding of cell death, different bioreactor cultivation modes, the concept of post-translational modifications and why many biopharmaceuticals are preferentially produced in mammalian cells.

We took a closer look at chinese hamster ovary (CHO) cells as the main production host for glycoproteins and answered why CHO cells are superior to most of the other mammalian cells used for the biopharmaceutical production of proteins. Since the original chinese hamster cell source was smuggled into the U.S. by two researchers in 1948, many new techniques evolved and the optimization of protein production is now not only dominated anymore by process design but also by targeted genetic cell line engineering as currently taking place in our eCHO PhD program.
The lecture also discussed N-glycosylation as the single most important post-translational modification of recombinant proteins where it was very beneficial that I could share my knowledge acquired during my own PhD topic (“Design of optimal CHO N-glycosylation profiles”).
During a following seminar which was building up on the lecture, we calculated key parameters in a mammalian cell culture process as a case scenario for recombinant IgG production (viable cell densities, integrals of viable cells, growth rates, specific productivity rates etc.).

From the view of a 2nd year PhD student with a lot of projects running in parallel, teaching first feels only like an additional amount of time “lost” outside the laboratory but afterwards turns out to be a very welcome alternation and is a great possibility to train presentation skills and re-read into basic literature which is both very beneficial for my own PhD thesis and further progress to become a future CHO researcher.