EMBL, the Europe’s flagship laboratory for the life sciences, hosted a conference on Chromatin and Epigenetics in its headquarters at Heidelberg from 3rd to 6th May this year. The conference was dedicated to Alan Wolffe who is renowned as a pioneer for establishing the idea that chromosomal organization of genes is a dynamic phenomenon that regulates their expression, cell division and differentiation. Since my PhD is focused on analyzing epigenetic regulatory network in CHO cell lines, I was extremely curious to attend this conference and catch up with the latest and network with the brightest in epigenetics. I presented a poster entitled “Phenotypic changes in CHO based on genes involved in energy metabolism” highlighting the exact genealogy of different cell-lines being derived from sequence variations in mitochondrial genome and DNA methylation profiles in nuclear genes associated with energy metabolism. The enrich - 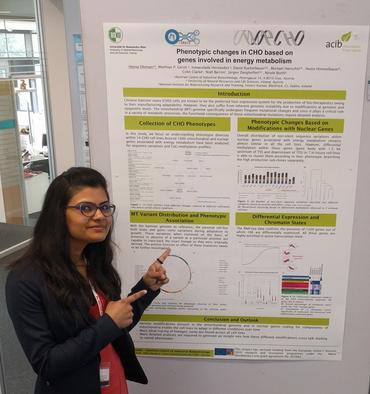 An EMBO conference: An experience to remember

ment  of chromatin states and their subsequent effect on differential expression within these genes across a time course of 9 days attracted interest of many researchers.

The architecture of the conference venue was awe-inspiring. The ATC (Advanced Training Center) building on the EMBL campus twists, mirroring the DNA double helix standing upright, where half of the posters were held on the ramps of helix A and another half of helix B. The conference started off with a session on “Regulation in chromatin” followed by “Developmental Epigenetics”, “Histone Modifications, RNA and Metabolism” and culminating with talks on “Nuclear Architecture”. It was very thoughtful of the organizers to plan the conference in a way to facilitate easy networking and information exchange amongst speakers and participants by reserving tables in the ATC Foyer where participants had the opportunity to get in touch with invited speakers of the day.

In all the four sessions, renowned speakers presented their findings on different contributors of genome regulation while focusing on molecular mechanisms of important proteins, cross-talk with other regulators, or enrichment of modifications in different states. The topics included but were not limited to - role of regulators to elicit cell fate changes, heterochromatin in quiescence, RNA Pol II pausing and effects of structural variants on chromatin architecture. It felt great knowing the advances being made in the field of chromatin specially analyzing interactions of and within domains with the use of HiC data analysis. All these studies were done on varied model organisms including bacteria, yeast, ants, mouse, drosophila, human cell lines and so on.

It was a privilege to hear one of the pioneers in the field of epigenetics, Sir Adrian Peter Bird from University of Edinburgh, elucidating the role of DNA methylation in gene regulation. He presented clinical association of mutation in MeCP2 gene. MeCP2 encodes for a chromosomal protein which binds to methylated DNA mediating transcriptional repression. He showed how they were successful in reversing the symptoms of Rett’s syndrome in mice through his groups findings on MeCP2 gene.

Apart from knowing the work of such established scientists it was great to interact with few of the people whose publications I am referring in my projects and network with other people working in the same field.